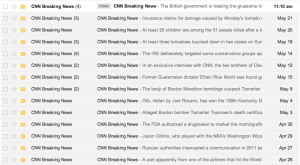 I’ve been an email subscriber to CNN’s Breaking News alerts for over a decade. In the beginning, it was sporadic and you might only get an email every couple weeks when some major disaster happened in the world. About five years ago it became once every few days, but still limited to major news events. Lately, it has become several emails per day. At this point, I can’t tell if CNN is really sharing large rare events or if they determined they could use this as a traffic source to their site to increase profits. Worse yet, instead of being limited to worldwide major events, the emails contain the results of reality shows, final scores in basketball games, or minor news about the US economy.

It’s become such a frequent email that it no longer feels like a rare alert system for tomorrow’s worldwide front page headlines, instead it feels like I’m following the most dramatic personal blog written by someone dealing with one daily tragedy after another.